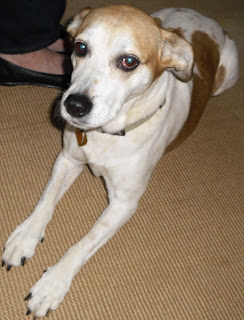 Lulu, our dog, is 11-years-old now, Shelley Baker Bridgman, a high school friend, has a dog 18-years-old--wow! I can notice Lulu's age catching up with her. Her face is a little whiter, she tires more quickly, and doesn't chase balls with much gusto.
As our pets age, they begin acting a little goofy sometimes. We had a cat that became impossible. Her habits became so anti-social that we had to transfer her to the garage. She died not long after. It was a shame, but her behavior no longer suited the inside spaces.
Pearl, a good-natured lab mix, got so gimpy, she couldn't stay clean. She was covered with feces and urine. I think about the day we took her into be put down... My wife was crying, I was distraught, and instead of staying with her, we just dropped her off. If I had it to do over, I'd change that.
Poor Geoffrey, a two-year-old Scottie we got to be with Pearl, only harassed that poor old dear with his constant nipping. He reached his end due to the loss of use of his back legs. He could drag himself about--that was it. I took him in and sat with him when they put an end to his life.
Now, our first dog we owned as a couple, Maurice, took his death in stride. A sufferer of heart disease, he strolled down our long driveway at a slow pace as if to run away. I think I called him, startled him perhaps, and he dropped dead on the spot.
We have suffered the deaths of rabbits--this rabbit chased the cat--Lucky, the unluckiest parakeet in the world, turtles, hamsters, and a finch, in our years as a couple and parents.

Now Lulu is 11, but she seems to be holding up pretty well. I don't think her eyesight is very good anymore, she seems to be underfoot a lot. And she won't hang out in the kitchen when people are cooking lest we set off the smoke alarms--yeah, no cracks about our cooking... She is very attentive to us, and to her home--guarding it. We don't take Lulu for walks much anymore. She tires and sometimes gets gimpy, but could her nails just need clipping? We've never had to cut dogs nails before, so this is on my list of things to do, get her nails clipped. She still chases about our fairly large yard without much of a slow down. There are squirrels, rats, birds, lizards, gophers, frogs or toads, etc. to chase.
Lulu has probably slowed down as much as I have slowed down. We are both kind of gimpy after a hard day. My wife is going to take another crack at getting Xena (our daughter's dog) into a therapy dog program. We make noises about adding another animal to our little extended pet family.
Maybe I have one dog left after this one. In other words, our next dog can easily outlive me. Perhaps, I have two dogs left in me. But let's face it, our pets are wonderful friends, family members, and like our stories about how old, deceased Uncle Charley used to say "Cheerio" before when he said goodbye, we will remember how Maurice once stole a stick of butter and ate it,  how the kids would sit on Pearl, or how Geoffrey was impossible to catch when he ran off.

Enjoy your pets while you can.
Posted by Frank Criscenti at 10:36 PM No comments:

When I Squeak, People Listen!

No one seemed interested in my squeaker blog. How was I to know that large breasts, squeakers, breast inserts, squeaky inserts, etc. etc. were passe? Come on. I'm old and not up on current trends. I had no idea large breasts were of no interest to animal lovers, well except for maybe cow lovers. Oh, this is udderly ridiculous.

Anyway, since last I wrote, I truly am retired...and old. We have grandpets. Pictured is Xena. We watch her sometimes. She is my oldest daughter's dog. Sometimes Xena comes with my actual granddaughter, Anika. This is great fun. We've watched Moo as well. Moo is my youngest daughter's dog. And sometimes, Moo comes with Holly, our other granddaughter.

Watching dogs and grandkids is great. You can walk them both. Buy them things.

Here's the deal, sometimes all I've really got is grandkids and granddogs. I'm happy as heck to sit around the house, petting the dog, or watching the dog, or the grandkids. Life isn't all that complicated,

I got to stop overthinking.
Posted by Frank Criscenti at 7:12 PM No comments: