Are Dogs the Perfect Humans 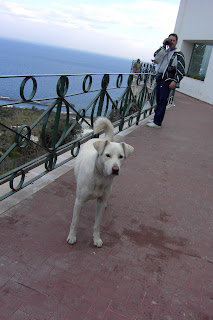 It's been nearly two months since I posted here. My mother, who was hospitalized in late January, is... well, alive and kicking. She had serious surgery that nearly killed her. Now she is in a care facility that luckily has two dogs. She misses her own dog, but at least she has friends.
This picture is of a dog that rode the Funicula on the Isle of Capri. The story of this fellow was the subject of one of my first blogs here.
So, I get the Dog/God thing. So are dogs more renaissance creatures than humans?
Certainly they're not cynical. They are always hopeful. Maybe, just maybe you'll drop that cube of butter or that rack of spareribs off the barbecue. They're always surprised when you come home. Well, maybe they're always happy to see you anyway. They forgive. They don't start wars or invade countries. While they may engage in dominant behavior, come on, it all makes some kind of doggy sense to set up a social network that is understandable.

There's a show on television about how dogs changed the world. They were mankind's early warning systems. Thug the Caveman couldn't sneak up on your tribe if you had a dog around. They kept the camp clean. They were man's best friend since before recorded history.

I feel a little goofy writing this today. I've been writing on a novel which is long form, and I know this is disjointed perhaps, but I need to get back on the horse. So here I am.

What if dogs really played poker?
Ah, that reminds me of a joke my wife's father told me.
I'm sure I've used it here before. I don't hear a lot of new jokes anymore.

So my dog plays poker but he's not very good at it.
Why?
Because every time he gets a good hand, he wags his tail.

I know this anyway. If dogs played poker, after they won all your chips, I'm pretty sure they'd return them. Especially if they could fetch them.
Posted by Frank Criscenti at 2:58 PM No comments: