A Poem--New Season of Sgt. P to Come? 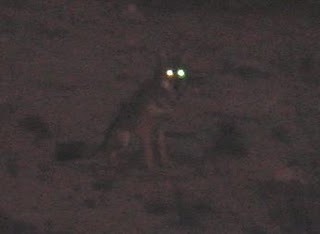 Hey guys. Hope to get into the swim of things sooner rather than later. Want to write a new Sgt. Prestleton piece someday soon. Fact is, and I will reveal this now, not that it is earthshaking, but I am writing a novel. First draft is about almost done as first drafts go. I have not completed the story. I know where it is going, but I admit, I am slowing a bit. I had set a Halloween deadline on myself.. I would still like to finish it by then. Halloween is an apt date, and I will reveal more when I finish. I think three people know about this book before now. It was two, now three, now however many go here will know. I have said book, writing a book, but it has been years and years since I have been so close to completing one. My last two "complete" novels have been stinkers I'm afraid. I have a better feeling about this. Thus, when I need to vent, I write poetry usually.
One person has read part of the first draft. Thanks for that one person for feedback. Three people know the subject. I do not discuss plot or subject too often. I have found discussing such subjects are counter-productive. So, there you have it. Hope these little poems are fulfulling in some sense. I love to write poetry. I have been writing it since high school.
Recently, I read Yeats book, A Vision about the occult and supposedly automatic writing. It is a difficult read in that I didn't know what the hell he was talking about most of the time. When it did make sense, it was fascinating. Now, I don't equate my feeble scribbles with Yeats on any level. Yeats, when he writes about women and love, was a master. Also, Stolen Child--my goodness, what poetry! Mingling hands and mingling glances... Ah, how wonderful. The one thing I do have in common with Yeats though, is that most poems I write in a few minutes, though I may think about them for hours beforehand. Perhaps the quickness of my writing is not an advantage. You judge.
I did post this on my Facebook page.
This is by moi. Thanks for reading.
﻿
﻿
Old gray dog comes pawing at the door
Disappears before you know it
Runs who knows where
This dog never kept
Never leashed
Runs away before it is welcomed
Never licks the hand
Never sleeps it seems
Howls only at the moon
Eye lights
Never barks
Drinks only rain water
Big gray dog visions
You think you saw him on the beach
Or maybe in the open spaces
Big gray dog that might not be
Or rush of fog
Ghost of coyote spirit
Gleaned not seen
Crepuscular visions
Or jumping at grasshoppers that
Whirl into the air around its ears


Posted by Frank Criscenti at 8:03 PM No comments:

COYOTES, SURFERS, AND MUGGERS MEET THE MAN WHO CAN'T SHUT UP. 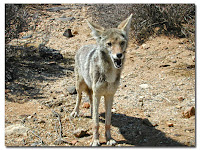 ﻿While walking in the nearby park one morning, I turned off onto a winding side path, the midst hanging close to the side of the hilltop. I rounded a corner, and about 15 feet away, there was a coyote. We have seen coyotes close up before, but never this close. The animal and I saw each other about the same time. I moved forward, with caution, and the coyote growled. I backed up, slowly, and a little frightened.
This is how I work. I figure good intentions make every difference in in life. I want to see things, and sometimes, my good "vibes" do not work.
I used to get into occasional arguments surfing. Never could I let them go. I made every effort to use logic. Hey, we should be having fun, and you shouldn't have cut me off, or I didn't see you, etc. Can't we all just get along? No, I never had a fight on the water, or later on the shore. I did get hit once by a kid at work long ago, who had heard too much of my explanations and attempts to resolve an argument. He slugged me in the face. I turned the other cheek. At the time, I fought regularly at a martial arts academy in San Francisco. It wasn't fear that stopped my hand. It just wasn't worth a battle.
Once, I was dragged into a doorway in San Francisco while hitch-hiking to Berkeley. The muggers pulled a pocket knife on me, and grabbed for my wallet. But no, "Peace, love, be cool man." It was 1970 and I wasn't giving up my five bucks. Like that was "totally uncool" muggers. I got away from these guys, and killing me would have been too much work I expect.
I used to drive a taxi cab in San Diego. I had a few problems, and got scared, but never got hurt, even when I drove the "bad" side of town. (It was so easy to get fares from people other drivers wouldn't serve.)
Once, I tried to calm down a biker with a gun, taking sense to him. I have revisited past battles that involved the potential for violence upon seeing the strangers again.
You know what? I talk to much.
I get too near to coyotes.
I try to work out problems when it seems useless. Violence, poking rattlesnakes with a stick, online spats--doesn't matter. I want to work it out-- I want to know how it works.
But sometimes I just have to shut up. Sometimes I guess people just want a minute to think, or be angry, or even to be unreasonable.
Someday I suppose I will try this method of being.
So far, no one has bothered to kill me, maim me, or even particularly harm me. I've probably been lucky.
I offer next--silence...


Did somebody have a question?

Posted by Frank Criscenti at 10:24 PM No comments: