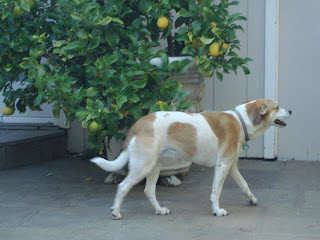 My Lulu is limping. She is favoring her left hind leg. We took her to the vet and the vet says there is no real danger or anything that needs to be addressed immediately, and Lulu seems not to even know she's supposed to limp when there's something exciting going on. Still, she's eight and one-half. She's getting older.

Lynn, my fantastic wife said she never even thought of Lulu as an older dog. Lulu is still playful, loves walks (she doesn't limp during those) and patrols our large yard like a champ, even when she sometimes has to do it on three legs.

Eight years ago I had to put our Scottish Terrier down because he couldn't work his hind legs. He was in great pain and couldn't do much but moan and poop on himself.

Putting your animal to sleep is an awful thing. It seems such a betrayal of their trust. I've done it twice and watched it once. With our dog Pearl we couldn't even stand to be present and I truly regret this.

While at the vet's the other day, there was a dog who was going to be put to sleep in the waiting room. He couldn't work his hind legs in any way other than to keep himself in a permanent squat, yet he still showed curiousity and spunk. His owner used a walker, and the irony of the situation was sad.

Dogs bring such joy, but unfortunately, they don't outlive their owners. It's a shame they don't just check out when we do.

I'm hoping with rest and care that this limping will resolve itself. It's been on and off for awhile now. I hope it doesn't develop into something worse. Our responsibilities as pet owners can sometimes be sad. Putting a dog to sleep is something you never forget.

Now, my dog Maurice dropped dead trying to run away. He was sick we knew, but comfortable and well-loved. He loved to explore, and so he sauntered off down our driveway seemingly headed for a jaunt around the neighborhood. When I called him back, he dropped dead. God bless his weak little heart. Hope I go the same way.
Posted by Frank Criscenti at 11:21 AM 2 comments:

Nice To Meet You Baby.

My new granddaughter Holland is surrounded by a group of dogs. There's Moo, who we consider her brother; Lulu, her aunt; and Xena, her cousin. I know it sounds silly, but there you go.

Each dog had its own particular method of first meeting the baby. Moo decided to lick Holly's head at first. Lulu ran about the room acting like she had lots to do and worry about because a baby had arrived; and Xena, with a tail that could knock you off your feet, held her tail in check and licked baby's feet upon first meeting the baby.

I think it's fabulous how understanding dogs are of small children. Of course, I am not overlooking the rare occasions when dogs attack kids. It happens. Even a Scottish Terrier I owned nipped my granddaughter Anika when she was small. That dog was a handful, but to be fair, Anika tried to pull a blanket out from under the dog and I think he got scared.

I recently heard about a dog that "kidnapped" a baby to take to the woods to care for it. Luckily the child did not die but problems did occur due to the dog's mothering instinct.

Don't worry. I don't think dogs should be left alone with children. I do think they are a great addition to the life of our kids though.

Unfortunately, in this day and time, I don't think kids really get the relationships we older folks had with our animals. Playing outside is becoming something you have to tell kids to do today. God knows, if I had video games, the internet, and 120 channels on the tube, I never would've gone out either.

We had three channels when I was a kid. On Saturday mornings, there was a smoking cowboy with a pencil thin mustache on tv who ran old cowboy flicks all morning long. My grandmother had to kick me out of the house cause I'd watch cowboys named Johnny Mack and Buck ride all over the same So Cal backlot for hours on end. (Funny, the transmitter for that station was located in Tijuana and the backlot probably housed the Manson family in the 1970's.)

We had two dogs at my grandparents' house in La Mesa. First came Mack, a standard-sized collie that would follow me about the yard. Then came Beau, a standard-sized poddle. It wasn't so much that I played with them, but they followed me about my grandparents' huge yard. They owned about 2/3 of an acre and I roamed it as if it were the size of Hearst's place in San Simeon. There were Eucalyptus trees to climb, a pepper tree that hid an area for a fortress, and a six-foot wall my grandfather built that made a great fort. I used to man the walls, holding off Indians (sorry, Native Americans), redcoats, and other nasties with a Eucalyptus branch shaped like a musket. Some years later I went back to my grandparents, found that branch and you know what? It didn't really resemble a musket at all.

Ah, the loss of innocence.

Welcome Holly. Welcome to a world where dogs lick your toes, where tree limbs look like magic wands, and where all boys want to be cowboys and all girls want to be ballerinas. You're a lucky little girl. I hope you have wonderful imaginings. Remember, a dog can be a guest at your tea party.
Posted by Frank Criscenti at 10:47 AM 1 comment:

The Dog Is More Spiritually Evolved I'm Sure.

You know, I have my regrets. If only I could apologize for everything I've screwed up in near 60 years. It's an ego thing I'm sure. I am so freaking needy.
Dogs have no regrets. And most of the time they have no ego.
This makes them more "Zen" than I am I'm sure.

I'm not a member of AA. I'm not an alcoholic, but I do know that one of the 12 steps is to apologize to those you have wounded.
I'm sorry.
Why is my dog so cool and I'm so lame?
How can that be? I have free will. I have an intelligence that is greater than the poochy mind of my animal. Yet she wanders about the yard, free of guilt. Free of regret. Free.
No she can't open the gate and leave. She can't take off and wander the open space down the street. But she has no mortgage. She has no fear that someday she will run into someone she once knew and that person will say, "you know, you were a real jerk to me."
There is a door that one can walk through at St. Peter's in the Vatican. It is open like once every 100 years or so. Maybe once a millennium.

If you walk through this door supposedly all your sins are forgiven. Now I have seen the door, but I missed my chance to pass through it in 2000. What a shame.
Had my dog been born, and in Rome, she could have passed the door without sin. She could cast the first stone. She doesn't though. Not only is she without sin-- she is without the concept. She forgives. Devine!
Dogs are such better people than we are.
Posted by Frank Criscenti at 12:07 PM No comments: