Sergeant Prestleson of the Royal Canadian Mounted Police, and his wonder dog Prince sat around the campfire one night in the wilds of the Yukon. They'd spent the day, hot on the trail of the notorious bandit, Dangerous Dan McGroan. The clouds of stars lit the night sky. The companions ate beans. Wonder dog Prince eyed his friend as the Sergeant picked away at his dinner.

"You know, King," the Sgt. said, "Maybe I'd like to settle down someday soon, maybe get married and raise some children." King stopped gulping his beans.
"I really like that new school marm in Whitehorse. She's the kind of woman I can imagine marrying."
King snorted.
"She's got beautiful eyes..."
"Sarge," King said. "Are you crazy?"
The sergeant beamed. "King, you spoke!"
"Yeah, I spoke. Remember... Wonder Dog, I can speak... You know all this."
"Of course," the man said. "It's just you keep quiet for such long periods, I just get surprised."
"Yeah, well," said the dog. "Get over it and think. The school marm? Those eyes of hers are colored contacts. And didn't you notice she's kind of cross-eyed. Makes her look goofy."
"No, never really noticed it," the man said. "She's got a beautiful smile..."
"False teeth," said the dog.
"Nice figure..."
"Silicone."
The sergeant blushed. "Nice legs..."
"One of them is wooden."
"Great personality..."
"Prozac."
The sergeant grabbed a stick and poked at the fire. "Why are you so hard on this woman?" Prestleton asked. "I find her very attractive and I like her."
"She's been married three times."
"Stop!" said Prestleton.
"What's the problem?" the dog asked. "I just think you could do better."
Sgt. Prestleton sighed. "But I like this woman."
King shook his head, then returned to gulping his beans.
"You know the difference between a can of beans and a mind?" the sergeant asked.
"Now, you want to play riddles?"
"Just listen," the man said. "The difference between a can of beans and a mind is that when you open the can of beans, they spoil in a day or two. But an open mind never goes bad."
The Wonder dog returned to his plate of beans. Silent now.
And, under the stars, with the moon shining overhead, and the hooting of owls in the distance, Sgt. Prestleton sang this lullabye.
There is no train
To take you away
There is no train
You won't be leaving
There is no train
to take you away
I will greet you
in the morning
No more tears
No more pain
No more fears
There is no train
There is no train
to take you away
Time for dreams
You'll not be roaming
Posted by Frank Criscenti at 10:45 PM No comments: 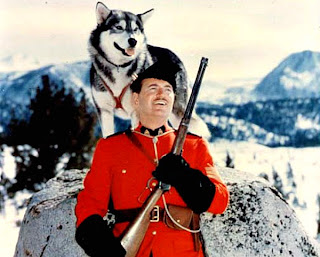 Sergeant Prestleson of the Royal Canadian Mounted Police, and his wonder dog Prince sat around the tiny campfire eating beans. The pair had camped on a stony bluff devoid of trees, above the Yukon River. Earlier in the day, the rain came down in cold, heavy drops. A hard frost followed. Sgt. Prestleton and Prince had spent the last week hunting down the nefarious Yukon drug kingpin, Frenchy "Buds" Lopes. While they missed catching Frenchy, they managed to locate all the hidden bales of contraband.

Prince shrugged as convincingly as a malamute could shrug. He felt pretty toasty under his fur.

Sgt. Prestleton began to shiver. Bits of frost began to fly from his hat. He glanced around as if to locate some source of fuel, but sadly, there was nothing to see. "You know, I'm not a drinking man, but I could really go for a cup of cocoa right now."

Prince bent down for another mouthful of beans, and then decided he would curl up around his friend, even if the man's odor repulsed him.

But the Sergeant rose with a grin. "You know, there's all those bales of dried drugs. I'm going to get one from the bottom of the pile and throw it on the fire."

The man fetched a bale. As soon as Sgt. Prestleton tossed it onto the fire, it flared up to a near bonfire. The sergeant moved closer to the blaze, and stretched out his hands. "Ah, this is better," he said, breathing deeply. "Right boy, this is the ticket, right?" The man arose and stood with his face over the top of the flames.

Prince curled into a ball, prepared for sleep.

Prince looked up at his friend, then put his head back onto his paws. He heard the man open another can. His companion chuckled to himself. Prince fell to sleep, secure in the notion that his master would now spend the night comfortably.

Was it the sergeant's snoring that awoke him? No, not the snoring. What? The gravel crunched from the weight of a foot. The dog stood at alert. He sniffed the smell of strangers. Where?

He barked to alert his friend, but the sergeant continued to snore.

Prince noticed movement some 50 meters behind Prestleton. To the left came another flash of movement, and to the right. Behind, Prince heard the scrape of someone climbing the bluff.

Although Prince had vowed never to speak as a human again, he called to his man. "Sarge! Hey Sarge, wake up!"

He ran over to his friend and licked his face. "Sarge, come on."

Still the men neared the campsite. Prince recognized the fat face of Lopes.

Sgt. Prestleton snored on without waking. Prince licked his face again. He pawed the man. He even bit his friend's hand. The sergeant snored away.

Prince noticed the gleam of weapons only some 20 meters off now.

His friend snored without stirring.

Prince fetched a burning ember from the fire. He shoved it down Prestleton's boot. Prestleton stopped snoring but shook the ember free.

"Damn Sarge! You're gonna get us killed!" Prince lifted his leg and urinated on his partner's face. The sergeant wiped at the wetness, reflexively.

Now the bad men stood around the edge of the campsite.

Prince pawed and bit and licked Prestleton, all without waking him.

Prince charged back and forth between the four men, bared his teeth, and growled.

All the criminals seemed afraid, but Lopes said, "Don't hurt the nice doggie. I will feed him to my fighting wolves for sport."

Prince now ran back and forth, feigning madness, and awaiting his chance to attack.

The bad men began to poke at him now with their hunting knives, laughing and making sport of poor Prince.

Suddenly, behind the group rose Sgt. Prestleton with his rifle. "Drop 'em boys before I aerate your gizzards."

The men dropped their weapons.

"Good job, Prince," the sergeant said as he began tying the hands of the captured men.

Prince stood guard over the men while the sergeant continued to tie them up.

When the four were finally bond hand and foot around the glimmering fire, Sgt. Prestleton said, "Another good day's work. We really fooled them into thinking I was fast asleep huh? By the way, Prince, your breath is getting a little funky. We might have to get those teeth cleaned. Well, how about some more beans."

Prince sunk to the ground, a little embarrassed.

Fine
Posted by Frank Criscenti at 10:29 PM No comments:

Labels: Prince gets his teeth brushed 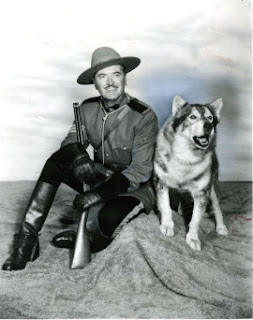 Sergeant Prestleson of the Royal Canadian Mounted Police, and his wonder dog Prince sat around the campfire one night in the wilds of the Yukon. A cold fog clung to the tops of the pines. Sergeant Prestleton ate the remains of a can of beans. His dog Prince also had beans in his bowl. They had been on the trail of the outlaw Frenchie Maurice Noir for six days. Frenchie had robbed an old miner and his granddaughter Kelly of their life savings. Prestleton meant to get it back.

The howl of wolves pierced the still night.

"I'm glad I have you nearby boy," said Prestleton to his wonder dog Prince. "I can count on you to protect me."

Prince looked up from his beans. Prince said, "Protect you from what?"

The sergeant started. "You spoke!" he said.

"Yeah, well, get back to the point. What do you expect me to protect you from?"

"That's not speaking English well," said the man. "One shouldn't end a sentence with a preposition."

A snarl curled on the dog's lips. "I'm a wonder dog," he said. "Not an English professor. Nonetheless, I suppose you think I will save you from the jaws of my brethren, the wolves."

"Well of course," said the sergeant. "You are my dog. My bosom companion. Mon ami. Pal. Buddy."

"Despite my wonder status," said Prince, "I am still a dog. A canine, but one step removed from the wild. I may join the wolves and have you for dinner. After all, beans are not very dignified fare for a wonder dog."

Prestleton frowned at this. A tear formed in the corner of his left eye. "But you have been my friend for years. My compadre. My mate. My..."

"Cut the crap!" said Prince. "How is it that you see predatory humans all the time-- that you view their inability to rise above the savage, and yet a dog, wonder or no, is expected to ignore his beastly instincts and save you, naive young fool that you are."

The man stared at his dog with disbelief. "But your acts of bravery... Your kindness... How do you explain these things if you are not my friend? My partner?"

"For all these years," said Prestleton.

The dog stared at the man for nearly a minute. Then a smile came onto his muzzle. "I'm just messing with you Sarge," the dog said. "Would I let you be eaten by a pack of wolves?"

"Don't be silly," said Prince. "You're my buddy. Besides, wolves are a bunch of Philistines."

"That's my boy," said the sergeant. "But all this time you could talk. Why didn't you let me know sooner? Think of the conversations we could've had on lonely nights such as these."

"Who can talk?" said the dog, and he went back to his beans and never spoke another word.