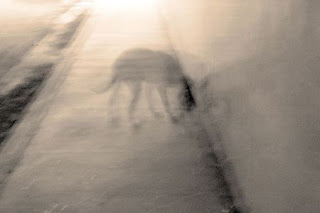 Christmas is a time for ghost stories. It is an English tradition and some of the most famous English/Irish writers engaged in Christmas ghost tales--including of course Dickens, MR James, RL Stevenson. This is my dog ghost story, written (perhaps) in the old style--reposted. Hope you enjoy it and Happy Holidays.

I am not a man who is easily misled. Never have I believed in creatures of the night, nor specters, nor ghoulies, nor goblins. As a God-fearing man, even if I were a sort who believed in the preternatural, I trust in the Lord﻿ to protect me.

Now, I have walked the road leading from The Golden Friars public house to my own home a thousand times. The trip is little more than a mile. It leads past no place of notoriety. No sites of ancient scaffolding line the road. There is neither church yard nor graves. Whether I have had my fill of ale, or none; whether darkness or twilight, I had never so much as stumbled upon that road.

That is, until Bindon Babel returned.

Bindon was the eldest child of Silas Babel, a villain already old when I was born. Silas married his young second cousin, and she was more beast of burden than mate. Those who remembered him better than I, said he lost his wife from fever soon after the birth of the last child. Many felt Silas' mistreatment led to his poor wife's death. The elder Babel had two sons and a daughter. His daughter, who had taken her mother's place as workhorse, died of consumption at 15; and some six months after, the youngest son died when a tree he'd attempted to fell, fell upon him--or so Silas swore.

Silas Babel lived on a rocky plot of land with an unkempt orchard surrounding it. This land joined the road I spoke of earlier by way of a broken gate. The Babel home was little more than a hovel. Here Silas drank and rarely ventured outside. Villagers called him Godless. They said he'd never darkened the door of a church except when he enslaved his wife.

The son Bindon left to travel and find fortune for the sake of his family. When his sister and brother died, the surviving brother attended neither funeral. Some 15 years later, Silas Babel also died. If not for a black dog howling outside the door, Silas might not have been found for weeks. As it was, in death, the pale, wrinkled Silas looked little changed from his living self. Again, the son failed to return for services. In all the years of his absence, neither sister, brother, father, nor anyone from the village heard from or about Bindon Babel.

Then, some dozen years after the death of his father, the remaining Babel from the village, returned.

Rumors at the Golden Friars spread for weeks. Some said Bindon had been a mercenary on the continent, and amassed a small fortune in loot. Others swore he'd been aboard a coastal raider prowling the waters of West Africa. A third rumor put Bindon in America at the head of a gang of thieves and murderers. No one, frequenters of the public house, or the wags who passed tales at the back fence, figured Bindon had acquired his money by legal means. But make no mistake, it seemed as if this Babel at least had a surplus of money.

This money, ill-gotten or no, Bindon Babel hurriedly spent. First he married. Like his father, he found a girl much younger than himself. And, like his father, he mistreated the poor thing. Then, he gambled on cards and the races. He drank too much. He travelled with men with shady pasts. In a matter of months, he gambled, misplaced, or invested without return most all his funds. Soon, his wife, misused always, caught a chill and died. Bindon Babel disappeared into the same hovel as his father, broken and mad.

Then, I witnessed the odd events that began along the road from Golden Friars. First, every night for some weeks, I saw a small black dog I'd never seen before at the gate to Babel's land. The dog sat without seeming to notice me as I passed. Then, one twilight, Bindon, weaving, held onto the gate, staring out at the road. Perhaps I wanted talk for the public house, or perhaps I felt neighborly, even with a man such as this, so I greeted Babel.

"Good evening, sir," I said. "Where is your dog this evening?"

"I have no dog," he said, "and this evening has nothing to recommend it."

The very next night, a black dog stood at Babel's gate. It seemed odd, but the dog had grown considerably, as if it had shot up in stature in just a day. Also, while it again seemed to take little notice of me, something in its demeanor struck me as more aggressive.

A week later after this second sighting of the dog, Bindon again appeared at his gate. He stood some way out into the road, looking in one direction then the other. This time he addressed me.

"Have you seen anything strange around here?" he asked.

"There is a stray or perhaps two stray black dogs who sit at your gate in the evenings. This is all I can report."

Bindon Babel cursed then, and without another word, dashed through the gate.

The next evening, yet a larger black dog, very similar to the first two--so similar that they must have come from the same family--appeared at the gate. This animal's fur stood up along the top of his spine and neck. Though it took little notice of me, I put as much distance as the road allowed between it and me.

The very next day Bindon again stood by his gate, in obvious distress. He asked me if I had seen anything odd that night. I told him a family of strays must have adopted his land as home and that one had followed me last night. In truth, I thought these animals must be Babel's.

"I am worried I may be mauled along the road some evening," I said. "Someone should get the sheriff to remove these brutes."

I thought Babel might admit that this family of animals belonged to him, and that he'd curse me for my comment. Instead, he agreed with me.

"Yes. The sheriff is a good idea. These devils roam my property late at night. I can't sleep. They scratch at my door. They whine. Sometimes I hear them growling near the windows. Fetch the sheriff. They're devils." He then spit out another string of profanities.

The next evening, as I approached Babel's gate with trepidation, another even larger dog stood. It took no notice of me, but I dashed past it, wishing I had a club for protection. Again, I heard an invisible dog of some great size panting behind me all the way home. When I mentioned this to my wife, she suggested that the dog probably followed me behind a hedge and that in the dusk, I would not necessarily have seen him.

"But I never saw him hedge or not, yet I heard him still."

My wife shrugged, but seemed unconcerned.

The next evening, and it was early evening this time, on my way from the Golden Friars, Babel sat in the dirt in the road, in front of his gate, crying.

"I had seen your wife several times," I said.

"Poor girl. She deserved better. She never did no wrong. Not to a living soul. It's all my fault. I deserve it. I surely deserve it. They'll never let me rest." With that, he rose, and trudged through his gate.

The next day, an even larger black dog stood at the gate. This time the animal eyed me every step. It seemed ready to pounce on me, and seemed to be guarding the entrance to Babel's property. I sprinted past the gate. All the way home, I ran. Behind me, unseen, some great hound chased me, panting and growling.

It took nearly a week for me to recover from my fright. The next time I went to the Golden Friars, I asked a few of the lads to accompany me home. A couple of ales each at my expense gained me this gang. We all carried sticks. All the way to Babel's the younger men bragged what they would do to any dog that dared to molest me or them. Then, at Babel's gate, five black dogs of various size stood near the road.

At the sight of us, the dogs began to howl. They crowded through the gate then, still howling, and somehow, they disappeared. The bunch of us heard nothing from them. None of us had been to Babel's since he'd returned. As soon as we came within sight of the dilapidated house, we noticed the door standing open, and the windows broken through.

No answer came from the house. As a group, we decided to enter. Perhaps the dogs were inside the house.

Inside, we found no dogs. We did find Bindon Babel on the floor. It looked as if he'd been attacked by wolves. His clothes were shredded. His entire body was covered with blood and in some places one could see the bites. Upon a table sat a sheet of paper. "The dogs are walking on two legs," it read.
Posted by Frank Criscenti at 1:15 PM 1 comment: