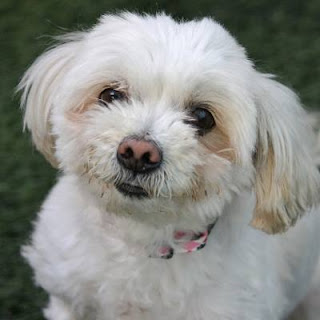 So Sophie has settled in. We got Sophie from the Peninsula Animal Shelter on June 1. I admit, her attitude seemed a little "bitchy" at first. We did not properly introduce her to Lulu, pictured on the masthead of this blog. Lulu is 11, Sophie is but four. Immediately, Sophie tried to assert dominance over Lulu. She plays one-on-one,, but not fetch or with other dogs.

At a recent outing at my daughter Kirsten's house, Sophie had to be "prey" to Xena. Admittedly, it was on Xena's home turf, but Xena attacked Sophie, and Sophie got into it with Moo, my other daughter's dog, but not Lulu. Now, there are no more wars, or few wars anyway, between Lulu and Sophie. It is toleration for now. Lulu is pretty sweet. She waits for Sophie when she goes outside. Maybe I am kidding myself, maybe Lulu is just making sure that both dogs have to go outside.
The other day Lulu, and we think it was Lulu, peed on the bed when I had carried Sophie outside without her to meet the neighbor. Lulu didn't pee on her bed, she peed on our bed. She is making her point about being ignored.

You know, introducing a dog, not a puppy into the house with another dog isn't all that easy. It isn't a slam dunk. It wouldn't be that easy to introduce one dog into a household without a second. Dogs have personalities. Sophie is devoted to Lynn, my wife. She would follow her to the ends of the earth. Lynn has started to teach Sophie to back off and not follow. Sophie is lovable. She does this thing where she lies on the ground, rolls on her back, and moves her front paws back and forth, like "rub my belly." She will stand up and do this as well. After the 330th time, it isn't as cute, but hell... Look folks, dogs aren't interchangeable. Lynn hopes to make Sophie a visiting, therapy dog. If Sophie the dog doesn't work out, we aren't going to return her. She's mostly housebroken, but still makes a mistake now and again. She does her business on our back patio, which is frowned upon. No problem. We will deal with it.
But thousands and thousands of dog people dump their dogs every year, either at a shelter or worse. Pit bull people dump their dogs because they don't understand what they have gotten themselves into, or chihuahua owners dump their dogs because they think they are cute and don't poop or eat or need care. I mention these two breeds, or more accurately mixed breeds because I seem lots of them at the shelter every time. Dogs are not something that should be dumped if they don't live up to one's expectations. They are noble beasts, who would give their very lives for their owners.

So, in regards to the pit bull attack and death of a six-year-old within the last few days in the Bay Area--surely you will not expect what I am going to say next. I admire people who adopt pit bulls and raise them. Kristen Johnson has a pit bull that she loves. Many people have pit bulls that are fine dogs and they trust them. On the other hand, I think a lot of people have no idea what they are getting into when they get these dogs. The child in this case was riding the pit bull like a horse. The father and mother were not present. This is bad parenting, not necessarily bad dog raising. Nonetheless, the dog was put down as one would expect. The owner was a police officer. What an idiot. I admit, I don't entirely trust pits. I think pits and children are a bad idea. Nevertheless, if you have a pit that is a great dog, bless your trust, your humanity, and your luck.

Posted by Frank Criscenti at 7:35 PM No comments: